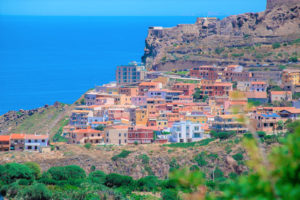 This is a town nestled on a cliff, facing the Gulf of Asinara, named Castelsardo.

It is considered one of the nicest towns in Italy. Thanks to its natural beauties, the marvelous creeks and coves, the artisanship, customs, amd it’s characteristic harbor, Castelsardo is included among the most striking and evocative places in Sardinia.

The “old-town” has preserved its ancient walls and the castle which is surrounded by two other historically significant religious buildings.

There is the Church of Santa Maria, and also Sant’Antonio Abate’s Cathedral, with its bell tower and a majolica dome crowning the top of it. All around it one finds a labyrinth of maroon, stone-paved streets, well-kept and decorated by the inhabitants; among them, ladies sitting by their doors, weaving and interweaving famous handmade baskets.

The town is renowned for its very tasteful cuisine, especially seafood dishes.